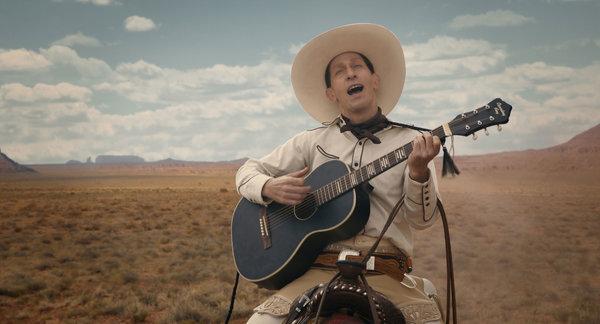 The Ballad of Buster Scruggs Review: The Missing Pieces

The original version of this review was too long for print, causing some paragraphs to be cut. These are the ones from the chopping block- the reviews of the second, third, and fifth shorts. The introduction and concluding paragraphs have also been left in for context.

The Coen Brothers’ latest film, The Ballad of Buster Scruggs, has been getting a lot of buzz. This anthology film has been thoroughly soaked in the dusty western aesthetic, it’s six stories each capturing a harrowing, lonely feel, with varying levels of success. It finds a framing device in a book of short stories, and as the pages turn between chapters, you realizes that the writing on them is legible. This attention to detail is carried proudly throughout the film. The Ballad of Buster Scruggs has been released in a few select theaters and is also available on Netflix right now.

The Ballad of Buster Scruggs’ second chapter, “Near Algodones”, isn’t quite as strong [as the first]. An interesting initial setup precedes a second half that, while delivering a few laughs, remains forgettable until the final few seconds. Despite the lead, an outlaw bank robber, being played by James Franco, the real star is the bank teller, played by Stephen Root, whose role is disappointingly short. It is good, and pretty entertaining, but “Near Algodones” just isn’t as successful as the first chapter, and is probably the most forgettable in the anthology.

“Meal Ticket”, the third chapter, sets the movie back on track. An absolute monument of visual storytelling, leads Liam Neeson and Harry Melling shine through the limited dialogue of an impresario and an actor. Traveling the country, the actor delivers dramatic readings of Bible passages and famous speeches, but audiences dwindle, and the impresario begins to search for new moneymakers. It’s quiet and heartbreaking, sticking with you through the rest of the film. It is part of the pacing problem of this movie, but the amount of emotion conveyed without dialogue is so impressive that you hardly mind.

The fifth chapter, “The Girl Who Got Rattled”, takes place on the Oregon Trail. It’s the only female-lead chapter, and actress Zoe Kazan is exceptional in the role, but after she sets out on the trail there’s so much talk of prospects and such that you really feel the runtime. A few moments throughout pack more punch, being sweeter or more grave. The last few minutes are more entertaining, though they feel weirdly out of place. By then most of the shock value of the film’s darkness has worn off, so the ending doesn’t land as smoothly.

The Ballad of Buster Scruggs is clearly a project everyone involved really cared about, with the Coen Brothers giving it their signatures. It’s beautifully shot, wonderfully acted, carefully written, and the attention to detail is on par with the best of period pieces. It has a charming sense of cheesiness that comes with the Wild West craziness, and the film embraces it. The pacing, however, is definitely an issue. The first chapter is fast and witty and meta, and the other chapters are too slow or played too straight to fill its shoes. Lots of the chapters are excellent in all other areas. The pacing might have been helped by releasing the film as a miniseries, with each chapter as an episode, but then it wouldn’t have gotten a theatrical release or all the awards buzz. The unique storytelling methods used are interesting, especially for someone with an affinity for filmmaking, but The Ballad of Buster Scruggs is a movie anyone could enjoy.