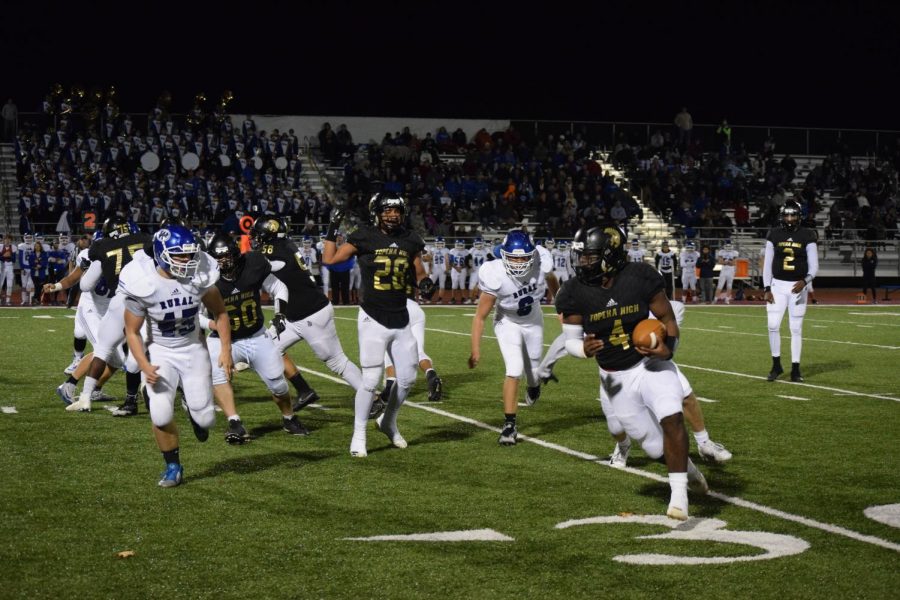 From kickoff to the final whistle, the Trojans had all the momentum. After coming out to a rough start the first time they played the Junior Blues back on October 5, the Trojans certainly redeemed themselves with total domination.

Only 52 seconds into the game, Topeka High scored their first touchdown, taking an early 7-0 lead. Then after a little over 90 seconds, the mighty Trojan offense came back down the fields and scored again at the 9:29-minute mark making it 14-0. At the 6:13-minute mark, Jacquez Barksdale, senior, made a diving catch to put the Trojans up 21-0. Then with 2:45 remaining in the first quarter, the T-High defense intercepted a pass to end the only significant Washburn Rural drive in the first quarter. After the interception, the Trojans charged on down the field to make it 28-0 going into the second quarter.

Ky Thomas, junior, started off the second quarter with a long touchdown run, making the score 35-0 only 21 seconds into the second quarter. Da’Vonshai Harden, junior, filled another category on the stat sheet with a touchdown of his own making it 42-0. On their return, the Junior Blues made it all the way to the four-yard line before the Trojan defense stopped their run on a fourth down attempt. On third down, Barksdale made a 91-yard return to score again and rack up the score to a whopping 49-0 lead. Washburn Rural finally scored on their returning drive to make the score 49-7, going into halftime.

The second half proved to be a lot less exciting than the first, as Topeka High’s quarterback, Harden, didn’t score the first points of the half until the 4:43-minute mark in the third quarter, making the score 56-7. Topeka would not score for the remainder of the game.

At the 8:41 mark in the fourth quarter, Aden Shute, senior from Washburn Rural, scored to make the score 56-14. The Junior Blues would later score in the last quarter off of a reception making the final score 56-21.

Topeka High will move on to play the Panthers of Derby High School in Derby, KS, Friday, November 9 at 7 p.m.