The Insecurities Girl With Confidence 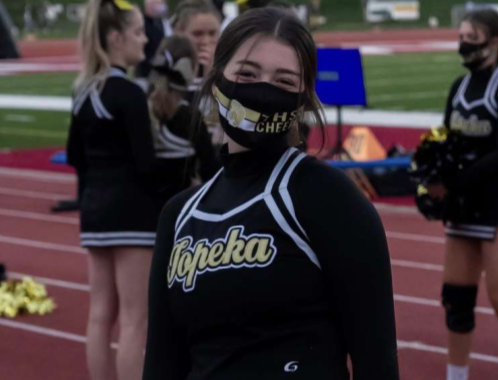 Isabelle Foster, Sophomore, who wrote the song, "Insecurities" and amassed a following on Tik Tok and YouTube, poses at Hummer Sports Park.

Topeka high sophomore, Isabelle Foster, has been growing on social media for the past year. Foster wrote a song called “Insecurities” in January 2020 that blew up on TikTok as well as YouTube. Foster has over 150,000 followers on TikTok and about 20,000 on YouTube today.

Music has always been a large part of Foster’s life for as long as she can remember. Her father plays guitar and her mother is a singer. Foster plays the piano, ukulele, guitar, and previously the violin. Her parents are proud of her success and support her as her mom “stalks her on TikTok”.

The song “Insecurities,” was inspired by how Foster was feeling. When she sang “you’re perfect in all of your ways” she was really singing what she wanted to hear. Foster said she hadn’t expected the song to really blow up because she had just written it for herself and her friends. Overall, she wanted to convey the message of “being comfortable in your own skin and loving yourself.”

Foster said, “Once you actually go viral and get famous, like you don’t know what comes with it. Like you get hate and love and people roasting you twenty-four seven. It’s crazy.”

Foster does her best to ignore the hate by not reading the comments; she had thoughts about getting off of TikTok and escaping the toxicity of social media.

She said, “with the hate comes a lot of love.” For Foster, love comes from many places. Foster’s audience on TikTok is based in the United States, United Kingdom, Philippines, Indonesia, and Brazil. Foster says people even make edits to her song “Insecurities” in different languages.

Foster strives to be a mentor to her fans. She wants to be seen as a “body positivity person.” Her audience consists of 92.2 percent females and 7.8 percent males.

She is also a hard worker and she writes all her music on her own. She gets her inspiration from past relationships, fake stories, and her imagination.

Another Topeka High sophomore, Trista Davis, said, “I think she is very successful and puts a lot of work into her music and it’s very impressive for her age.”

She said, “I want to get my music out there and TikTok is the only way people will actually watch it.”

When asked if she wanted or wished for something so much growth and popularity such as this, Foster said, “I don’t know, I definitely hoped for it, like I wished.”

With this growth on social media, Foster has grown with it.