How to Fix Netflix’s “Tall Girl” 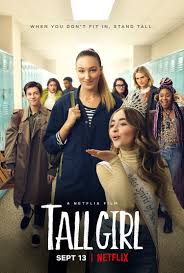 The 2019 Netflix film Tall Girl is about a teenage girl named Jodi who has towered over her peers for as long as she can remember. She can’t find women’s shoes in her size, she’s relentlessly teased, her parents option medical treatments for her height, and she’s too self-conscious to play piano, the one thing her massive hands are good for. Being tall and hating it is most of what Jodi talks about and most of her motivation. So how tall is Jodi, you ask?

And for a movie called Tall Girl, that’s a big problem. Jodi, the movie’s namesake, isn’t particularly tall. She’s above average, sure, but she wouldn’t “tower” over people, especially not by high school, unless the rest of her classmates were all under 5 ‘8″. That’s quite a condition to suspend disbelief for, and it doesn’t help that the movie is chock full of cliches, bad jokes, awkward dialogue, poorly defined or downright useless characters, and a slew of other issues.

Here are some ideas to fix it.

Make it an absurdist comedy.

A lot of this movie’s issues stem from the more cliched aspects, and they really clash with some of the “comedic” choices. You already have goofy characters, like the under-utilized knife-throwing beauty queen sister, and a plotless concept, so why not run with that? If the filmmakers did something outrageous, really leaned into a wacky story or concept, the movie could have been good, if not interesting. One of the easiest ways they could have done this is through shot composition and wardrobe. Have Jodi’s head out of frame for the whole movie, really dramatize the sightlines when filming conversations between Jodi and the other characters, and have the makeover scene include ridiculously too-short dresses and pants and sleeves. There are a few examples of these techniques in the film, but if they were more consistent it would have been more effective.

Make the characters crazy specific or comically one-note. Most are already one-note, so how hard could it be to make that funny, too? Put Jodi on stilts the whole time and have no one acknowledge it. Set the film in a society where height is super rare, or one where everyone over a certain height is ostracized. That might have justified the overdramatic and uncalled for speech Jodi makes about loving herself, if it were tweaked a bit. And that brings me to idea #2.

Ditch the preachiness, or at least justify it.

For those who don’t know, Ava Michelle, the girl who plays Jodi, started off on Dance Moms. However, she was bullied for her height, mostly by her (grown-up) coach, the notorious Abby Lee Miller, and was eventually thrown off the team. She’s been open about how much that hurt, and about how difficult it is to be a dancer who’s above average in height.

That could be a movie, maybe even the seed of a good documentary. It sounds far more interesting and believable than someone being legitimately offended by people asking, “How’s the weather up there?” If the movie was about a specific, height-related issue instead of light, uncreative teasing, the whole thing would make much more sense. They could also have achieved a more believable story through casting. Find an actress who’s tall by all standards, not just women’s. We’re talking at least 6 and a half feet tall, preferably 7. Talk about health issues, difficulty finding clothes, not being able to fit through doors, and the numerous other inconveniences and struggles that could come with being truly tall, especially as a teen girl. And let Jodi’s bullies be worse. Calling someone LeBron is unfunny and weird, not necessarily mean.

Make us actually care about Jodi.

We’ve established that Jodi wouldn’t really be considered a “freak” based on height alone, but aside from that, she doesn’t have a lot going on. She’s a thin, white, smart (or at least we’re told she’s smart), teenage girl with a well-off family, a couple of good, supportive friends, and a penchant for piano. For her, wearing men’s size 13 Nikes should not be the end of the world, but Jodi’s only real character trait is acting like it is. It doesn’t help that she has several reciprocating love interests throughout the film, which makes her complaints about guys not liking girls who are taller than them seem pretty misguided. She talks about people seeing her simply as the tall girl, about them not seeing her other traits and talents, but the movie itself doesn’t let her be anything but tall. She never gets over her fear of playing piano in front of a crowd, or decides to play basketball or volleyball, or tries to help raise awareness for other issues all tall people would face. She just complains and sulks and then decides she loves herself. That’s not an arc, that’s, like, a reverse plateau.

Tall Girl could have been what it already thinks it is. It could have made a statement or been funny or relatable or entertaining. It could have been good, but it seems that no one during the whole course of production thought hard enough to realize that the movie was both too absurd and not absurd enough, and that it was absurd in the worst way possible. It’s absurd in a basic and almost regressive way, and there were at least a dozen ways to make it better. Maybe some of these fixes are tall orders. Fine. But this movie is fundamentally flawed in a way that was extremely avoidable. The lack of effort is palpable; maybe that’s the biggest problem.