President Trump Isn’t Talking To You 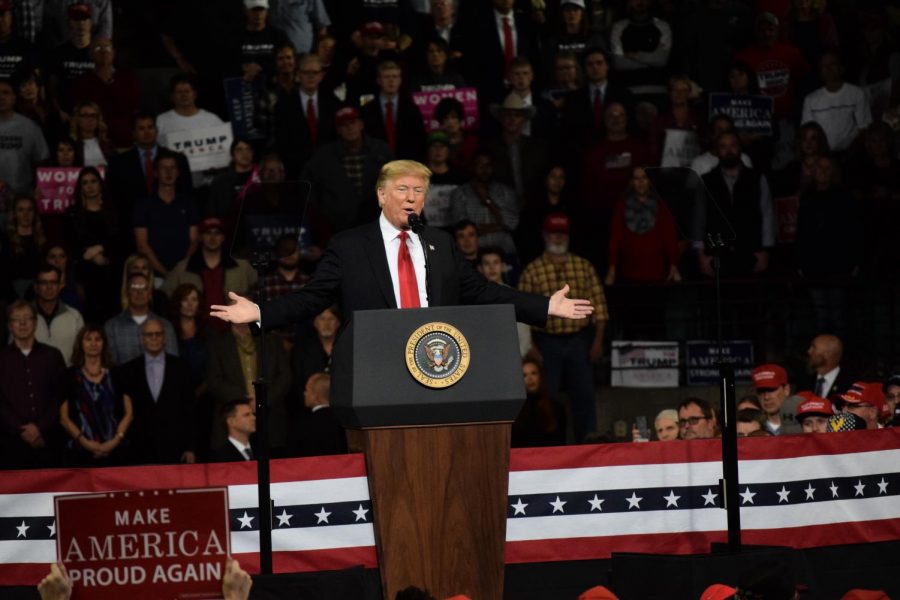 President Trump speaks to the crowd. Photograph by William Hendrix.

In the wake of President Donald J. Trump’s visit to the capital city, we have a lot to unpack; however, I’ll only be scraping the very top of the barrel of what was a very extensive event. To understand the mood of the President’s Make America Great Again Rally, we must first take a look at some of what occurred in the past week under the Trump Administration. In the past week alone, the United States has seen President Trump come to an ambitious new trade deal with its neighboring nations; Canada and Mexico. A new jobs report was put out, and it was seen that the national unemployment rate has dropped to 3.7%; the lowest unemployment rate in 50 years. Finally, to cap off President Trump’s “Week of Wins,” we saw the Senate Judiciary Committee vote to move now Supreme Court Justice Brett Kavanaugh on to the Senate, where he was confirmed for the Supreme Court, and then sworn in on the same day, October 6, 2018; the same day President Trump came to town.

The Trump administration has seen a few wins in the past week anyone could admit, so it’s pretty easy to get a good idea of what was discussed when the President was in town. Well, that, and he was also in town to endorse Secretary of State Kris Kobach in the 2018 gubernatorial election, and Steve Watkins for a position in Congress in Washington D.C in the 2018 midterm elections.

While the President did come with a defined rhetoric, that didn’t stop him from going off cue as per usual, this time to celebrate the swearing in of Brett Kavanaugh, and to poke fun at “Leaky Dianne Feinstein,” and “Elizabeth ‘Pocahontas’ Warren,” (just to name a few.) As for the journalists in the White House Press Corp, including myself, and Nathan Swaffar, the newspaper’s sports editor, we were positioned amidst the cheering and commotion on a platform that was roughly 75 feet away from the President, with anchors from the local news outlets, such as KSNT and WIBW, all the way to national news outlets like FOX, NBC, and CNN. While being up on the highest level of the platform, I saw several things going on around the President’s speech, including several secret service agents removing some disgruntled spectators that had slipped through.

During the President’s speech, more and more journalists creeped up onto the platform that all of the rest of us were on; so many to the point that it got the attention of the President. When all eyes were turned to us, he remarked at how many of us were there, and proceeded to call the journalists the “lying media,” and of course the notorious “fake news.” Accompanying that was a wave of booing from roughly 11,000 spectators that lasted about 10 seconds, and that was the extent of it. It wasn’t prolonged, it wasn’t dragged out, and it was not offensive. If anything, getting booed for 10 seconds felt more like someone was having a joke. One you could have a laugh at regardless of who you are if you aren’t extremely uptight.

One of the things I happen to agree with the President on is his stance on “fake news.” It does exist, but I don’t think the title “fake” that it was given was ultimately the right one. If I were him, I’d label it “unfair” at best. In a census taken by the Shorenstein Center at Harvard, the mainstream media’s coverage of the 2016 election of then candidate Donald Trump was, statistically speaking, more negative in tone. 17.5% more negative, to be exact. This shows that there was an inherent bias in mainstream media coverage of the election, which is probably what President Trump refers to when he goes on a tirade about “fake news.”

After finding these figures out for myself, I was really disappointed to see that my fellow journalists have taken the liberties of playing favorites in their coverage. Hasn’t the precedent of covering something as impartial and honest as possible always been the goal in the field of journalism? When you consider the odds President Trump defied, it’s no surprise he frequents taking pot shots at mainstream media. As journalists, I think it’s imperative that we maintain an honest, and impartial profession, regardless of political leaning.

I don’t think President Trump hates journalists, and he’s definitely not trying to censor anybody, regardless of him going after us. The same could be said about his supporters because, contrary to popular belief, I, as a journalist, was well received by the masses at the end of the rally when I was taking pictures of them, and shaking about a hundred different hands. There was no lynch mob that wanted to bludgeon me to death and then string me up. They were just ordinary people who showed up to show a little patriotism for their country and their President. Not an angry mob.

In hindsight, the event was very unique in that I, along with my colleague, were among a very select few of student journalists that were allowed into the designated press pool at the event. There were only five of us, after all; three of which came all the way from Manhattan High School. This event at face value was a rally for the patriots of the state of Kansas to show out, and have a good time; however, when you take a good look at it, is a learning experience. A learning experience in the sense that you get an idea for why these people support our President, even if you don’t.