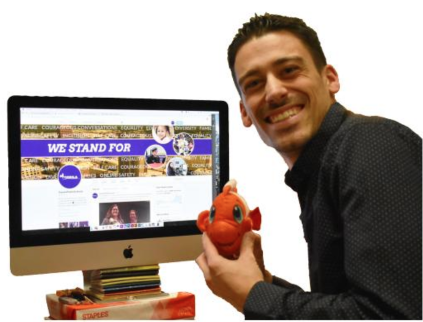 Jon DeMeo has been running the Topeka Public Schools Twitter account since the start of the year. After DeMeo took over, the interaction between students, staff, and the district has spiked.

In only 10 months, the Topeka Public Schools Twitter account has practically doubled its number of followers. The account’s satirical, comical, and informational tweets have left people wondering who the person is behind the screen.

One student from Topeka West, Lake Johnson, tweeted out “Let’s get 250 retweets to find out the mastermind behind this account!” In the tweet, Johnson had even included a conversation he had with the account over a direct message. The tweet garnered 83 retweets and 34 likes.

Through a little sleuthing on the 501 website and process of elimination, the man behind the account has finally been revealed.

Jon DeMeo, senior communications specialist, said that the TPS Twitter account has been around for awhile, but he started ramping up  the account at the start of the school year.

DeMeo said the Twitter account gets slammed on cold or snowy days with students asking for the day off. On Jan. 15, students were particularly interacting with the account and asking the district to cancel school the next day.

After the superintendent decided to cancel school, DeMeo tweeted “One minute you’re the enemy and the next you are the hero. #SnowDayDecisionMaking.” The tweet received 17 retweets and 156 likes.

“The district communications team really has our hand in a lot of things that people probably don’t even realize,” said Kruger. “Any branded material coming out from the district at any level is coming, at some level, through here.”

DeMeo agreed, saying that the communications team supports every school in the district through media support, graphic support, writing, and press releases.

“It’s really like we’re kind of this hub where everyone kind of shoots through us and then we take it out from there,” he said.

Even though the school district might seem like some distant and unreachable entity, the communications team is passionate about what they do and strive to personalize the digital interaction between the community and the district.

Howland, communications specialist, said that she loves working in education and being able to give back to the district she came from.

“I graduated from Topeka West. I’m actually from 501, so being able to come back from Topeka, come back to 501, and give back to the district has been really special.”

DeMeo, Howland, and Kruger say they love telling and sharing the stories of students in the district.

“I wouldn’t do the job unless I felt like I got the chance to tell meaningful stories. I feel like we get to tell really meaningful stories across the district,” said DeMeo. “It’s different. I mean, we’re public school. It’s not really normal for public school to probably be too conversationally funny with people and kind of jab at different things, but it’s also human,” he said. “We all say we want our brand to have a personality, but if you have a personality, you don’t talk about the same thing over and over and over again. You talk about different things. Even with Twitter that’s what we try to do.”